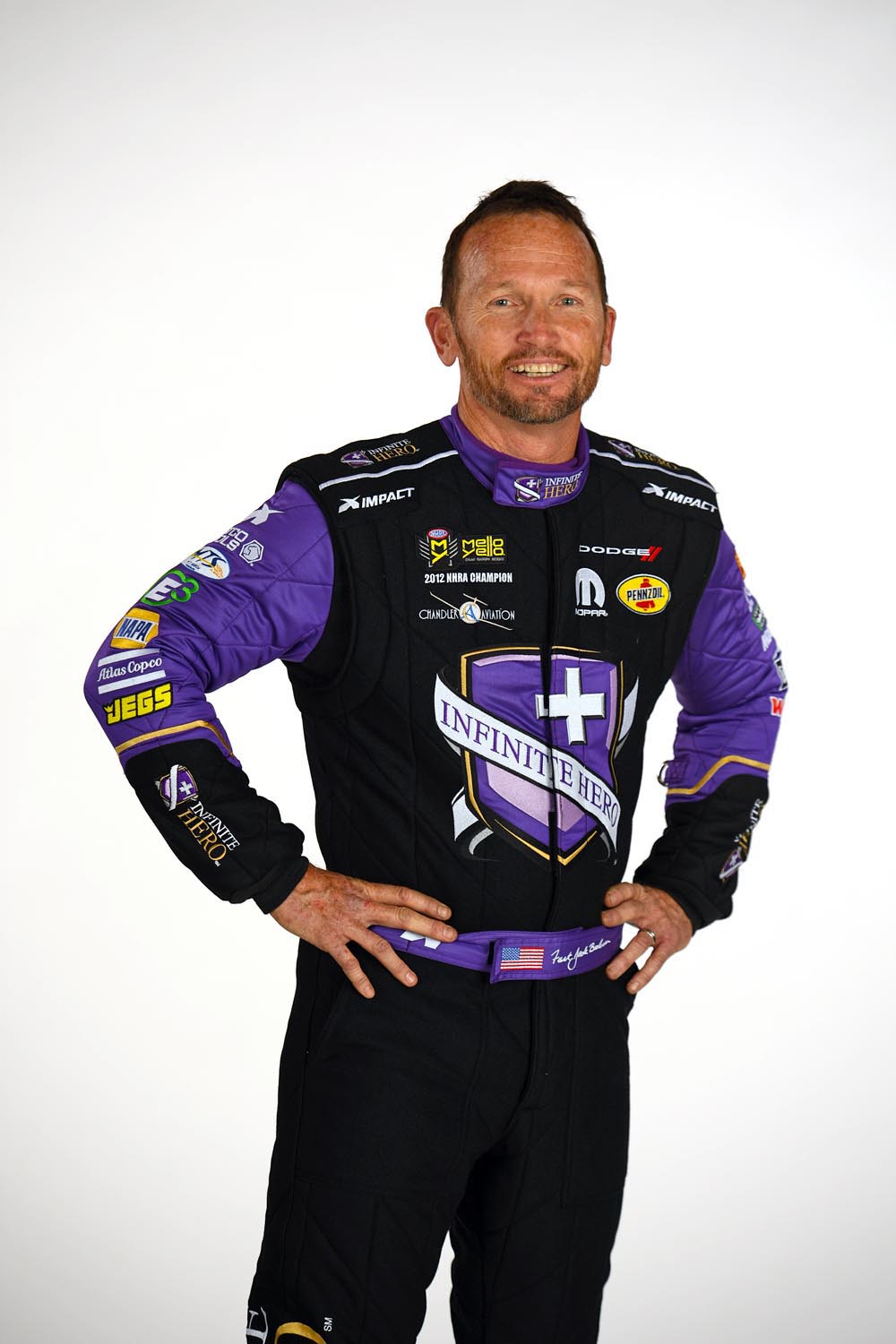 • Owns two NHRA world championships: Funny Car in 2012 and Sportsman Super Comp in 2003
• On May 2, 2013, was presented with the U.S. Air Force Wall of Achievers honor in Enlisted Heritage Hall at Gunter Annex of Maxwell Air Force Base in Montgomery, Ala. Heritage Hall presents tributes to enlisted men and women who have contributed to the growth and development of the United States Air Force. Among former enlisted airmen receiving the honor including President George W. Bush, Brigadier General Chuck Yeager, singers Johnny Cash and Gene Autry, actor Charlton Heston and comedian Flip Wilson.
• The City of Norco, Calif., presented Beckman with the Key to City on Aug. 10, 2013, and declared the day “Fast Jack Beckman Day” to honor its resident for racing accomplishments and work as a national spokesman for the Chemotherapy: Myths or Facts campaign.
• Has been licensed in 12 different NHRA competition categories
• Consultant for Frank Hawley’s NHRA Drag Racing School where he taught more than 7,000 students
• Former sergeant in U.S. Air Force
• Cancer survivor

Jack Beckman and the Infinite Hero Foundation Dodge Funny Car team claimed two wins in seven final rounds to finish the 2019 NHRA Mello Yello Drag Racing Series season second in the standings. The Dean Antonelli/John Medlen-guided team was a solid threat to contend for the championship throughout the entire Countdown to the Championship, and although Beckman came up just short of clinching a second Funny Car world championship during the final day of the season, he did close out the year with a win.

Beckman’s two event wins weren’t his only highlights in 2019. He secured the pole at three of the last seven races of the season, including the prestigious NHRA U.S. Nationals where he rocketed to a runner-up finish before taking over the points lead at the first race of the Countdown two weeks later. His second event win of 2019, occurring at the NHRA Finals, allowed Beckman to check his home track of Auto Club Raceway at Pomona off of his personal win list.

Since Beckman, a cancer survivor and former U.S. Air Force sergeant, joined Don Schumacher Racing toward the end of the 2006 season, he has amassed a collection of 30 Wally trophies in 63 championship round appearances.

Beckman campaigns one of DSR’s two ‘giving cars,’ which are funded by Doug Chandler in honor of his late wife, Terry Chandler. It was Terry’s goal to raise money and awareness for causes near and dear to her heart, and as a veteran, Beckman is the perfect candidate to represent the Infinite Hero Foundation, a non-profit organization that confronts mental and physical issues facing returning military heroes and their families.

“Everything this Infinite Hero team has accomplished is because of Terry and Doug Chandler’s generosity, and I won’t ever forget that,” he said. “I know we all can be proud of the things we have done on and off the track.”

Beckman was optimistic about the 2012 season after crew chief Rahn Tobler and crew led him to a second-place finish in the 2011 NHRA championship standings with three event titles and one No. 1 qualifying position.

After the fourth event of the 2012 Mello Yello Drag season, Beckman was ranked third in points but at the end of that race team owner Don Schumacher opted to move Tobler and crew from Beckman to teammate Capps after Capps didn’t qualify for that event at Las Vegas.

The following week, he had a new crew chief.

At the next event, the team lost in the second round of eliminations and the following event failed to qualify. The third time out, he lost in the first round near Atlanta and dropped to sixth in points.

But two weeks later near Topeka, Kan., the “new” team won their first NHRA national event title together and the march to the championship began.

Over the last 16 NHRA events of 2012, he won three race titles and qualified No. 1 four times.

And no event was bigger for the team than the one on Oct. 5-8 at Maple Grove Raceway near Reading, Pa., where the team set NHRA national records for elapsed time (3.986 seconds) and speed (320.58 mph) and advanced to the semifinals. The E.T. record earned a 20-point bonus that was pivotal in his championship race with Capps.

In the season-finale at Pomona, Beckman had to keep pace with Capps and when Capps lost in the semifinal round the 2012 Funny Car world championship went to Beckman and his team.

Like many successful racecar drivers, he inherited the racing gene.

Beckman’s father, Bob, and mother, JoAnne, were “car people” who introduced him to the mechanical aspects of street cars. By the time he was 17, he had owned several cars that contributed to honing his mechanical skills.

He notes that it was his Uncle John Jorgenson who convinced his parents to let him take him and his brother to Orange County International Raceway near Los Angeles for their first drag race.

“The first time I saw those cars, felt those cars, smelled those cars, listened to them and watched them, everything about them was absolutely thrilling,” he recalls. “And from that day I knew that I wanted to drag race.”

His father – who goes by “Slow Bob” to contrast his son’s moniker of “Fast Jack” – was a hot-rodder. Bob didn’t race but passed on mechanical skills and sold his son a 1968 El Camino that he still owns and is in the process of restoring. Once he passed his driving test in the El Camino on his 16th birthday, he started tinkering with its intake manifold, camshaft and other components.

FROM DROPOUT TO SERGEANT

Beckman admits to losing interest in high school and left when he was 17 and began working full time in a tool warehouse. He knew he needed a new direction in life. After earning his GED and passing the Armed Services test, he enlisted in the U.S. Air Force before he turned 18.

“That was likely the best decision I ever made,” he says. “It gave me direction, focus, job skills and a renewed sense of self-worth.”

He was honorably discharged as a sergeant at age 21.

Soon after returning home to Southern California, he joined the Funny Car team owned by Tim Grose where he worked on the bottom of the engine at races. But after the team lost sponsorship funding, Beckman took a job in 1988 as an elevator technician for Westinghouse in Southern California. During that part of his life he began competing regularly in NHRA Sportsman categories.

Drag racing remains his passion and doing it full time was a dream. He quit the elevator company after 10 years to become an instructor at the Frank Hawley Drag Racing School. Among the 7,000 or more students he taught – several of whom he has raced including John Force’s daughters – were some who continue to play major roles in his life.

In 2005, Rodger and Karen Comstock began supporting his dream of driving a Top Fuel dragster and he made his debut in 2005 after successfully completing treatment for non-Hodgkin’s Lymphoma.

FROM CHAMP TO CANCER PATIENT

In 2003, he drove his 160-mph dragster to the NHRA Super Comp world championship. Life was racing along right on track.

But the next year he began experiencing health problems that were ultimately diagnosed as high-grade level 3B lymphoma, a cancer that had invaded his body from hip to neck. He underwent six months of chemotherapy treatments but continued to teach at Hawley’s school and race as an amateur.

Throughout the ordeal, he was inspired by an outpouring of support from family, friends and fellow racers.

“People I barely knew would come up to me at the races and tell me they were thinking of me,” he says. “I can’t describe what that meant to me. It’s also nice not having to die to know how much people care about you.”

He had his last chemotherapy treatment on October 25, 2004 and remains in remission. As he continued to regain strength, he drove 12 races in 2005 in a Top Fuel Dragster owned by Dexter Tuttle and partially sponsored by the Comstocks’ Mail Terminal Services business.

His journey to winning the 2012 NHRA Funny Car world champion began in 1986 when he made his first pass down a dragstrip in his El Camino in a time of 15.06 seconds and 90 mph when he was 19 and stationed at Clovis, N.M.

When he was discharged two years later, he moved up to NHRA bracket racing.

"First, it was all about the time slip. Then I realized you could win a trophy, and that's all that mattered. When I realized I could win money then my emphasis shifted to that.”

And helping people is a longer lasting prize.

The Latest From Jack