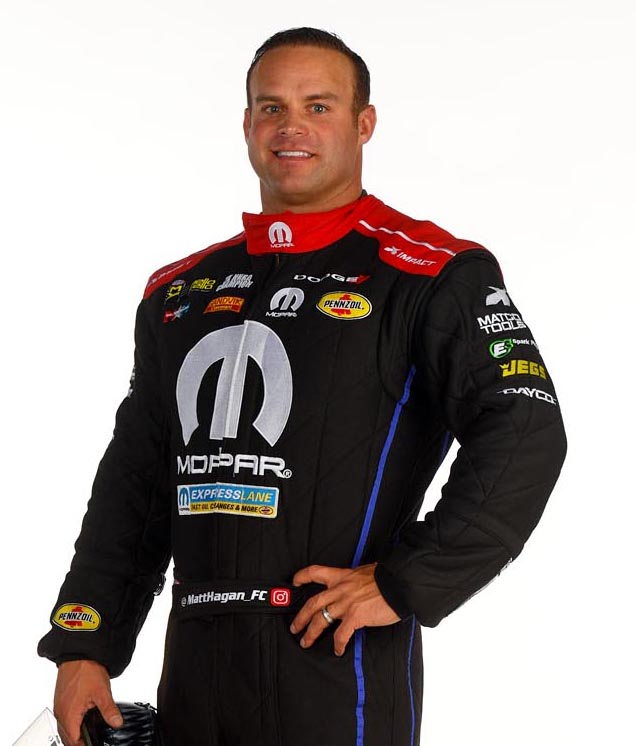 Matt Hagan and the MOPAR Express Lane/Pennzoil/Sandvik Coromant Dodge Funny Car team, led by crew chief Dickie Venables and assistant Michael Knudsen, wasted no time putting together a competitive 2018 campaign. During qualifying at the NHRA Winternationals, Hagan powered his Dodge Charger to the No. 1 spot and went on to race to victory at the season-opening event for the second year in a row.

Hagan retained the Funny Car points lead throughout the first three events and scored two more final round appearances before putting his MOPAR-powered machine in the winner’s circle in Norwalk. At the very next event in Epping, N.H., Hagan picked up another No. 1 qualifier before driving his Dodge Funny Car to victory for the third time in 2018.

Later that summer at the Dodge Mile-High Nationals in Denver, the speedster had the unique privilege of being the first amongst his NHRA competitors to debut the new Dodge Charger SRT Hellcat. It took Hagan and his team only two races to claim their first pole with the new cutting-edge Hellcat body.

At the prestigious NHRA U.S. Nationals, the final event of NHRA’s ‘regular season,’ Hagan raced to a runner-up finish.

The two-time NHRA Funny Car world champion qualified second for his eighth NHRA Countdown to the Championship playoff run and closed out the year with another visit to the finals in a special ‘Las Vegas-esque’ chromed-out Pennzoil Hellcat livery.

The first Matt Hagan Outdoors store opened in December 2013 in Radford, Va., near Hagan’s home in Christiansburg, Va., and success led to moving to a larger location a year later and opening a second location in 2016.

When not wrestling his 11,000-horsepower Dodge Charger SRT Hellcat Funny Car, Hagan spends days on his 2,100-acre cattle farm in Christiansburg where he raises more than 600 “momma” cows that produce calves for the market. He is hands-on from growing feed to being able to handle every chore on the spread.

He is an avid hunter and loves spending early mornings in a tree stand on his property hunting for deer and takes a couple trips each year out of state to hunt deer and ducks. If his bounty is too much for family and friends to consume, he shares the meat with groups helping the unemployed­­ around his Virginia home.

In 2009, Hagan joined DSR as a rookie and made it to a pair of final rounds and earned two No. 1 qualifying positions to earn a nomination for the Auto Club Road to the Future award as rookie of the year.

In 2008, he tested the NHRA Funny Car waters at four events and qualified No. 1 at the U.S. Nationals near Indianapolis. His early success caught the eye of Schumacher, who called to congratulate him after making the cut at the year’s most prestigious event. That conversation and his ability led to Schumacher hiring him full time for 2009.

Hagan was a proven talent after jumping from Pro Modified to behind the wheel of a Funny Car sponsored by Shelor.com, his family’s automobile business Shelor Motor Mile in Christiansburg.
As an owner/driver, he had great success during 2008 in IHRA competition where he placed third in the Funny Car category and amassed a class-best three event wins.

Hagan has been racing for almost half his life. Starting on his family’s quads as a teenager in Virginia, he developed a passion for speed and the thrill of competition to move into circle-track, stock car racing. From there, he began bracket drag racing and later made a huge splash in Pro Mod, earning the 2006 Rookie-of-the-Year honor in the NHRA AMS Pro Mod Challenge.

Hagan was an all-around athlete at Auburn High School where he was a defensive lineman and all-district center on the Eagles football team. In the spring, he was the school’s catcher on the baseball team.

He attended Radford University for four years and majored in recreation, parks and tourism.

The Latest From Matt