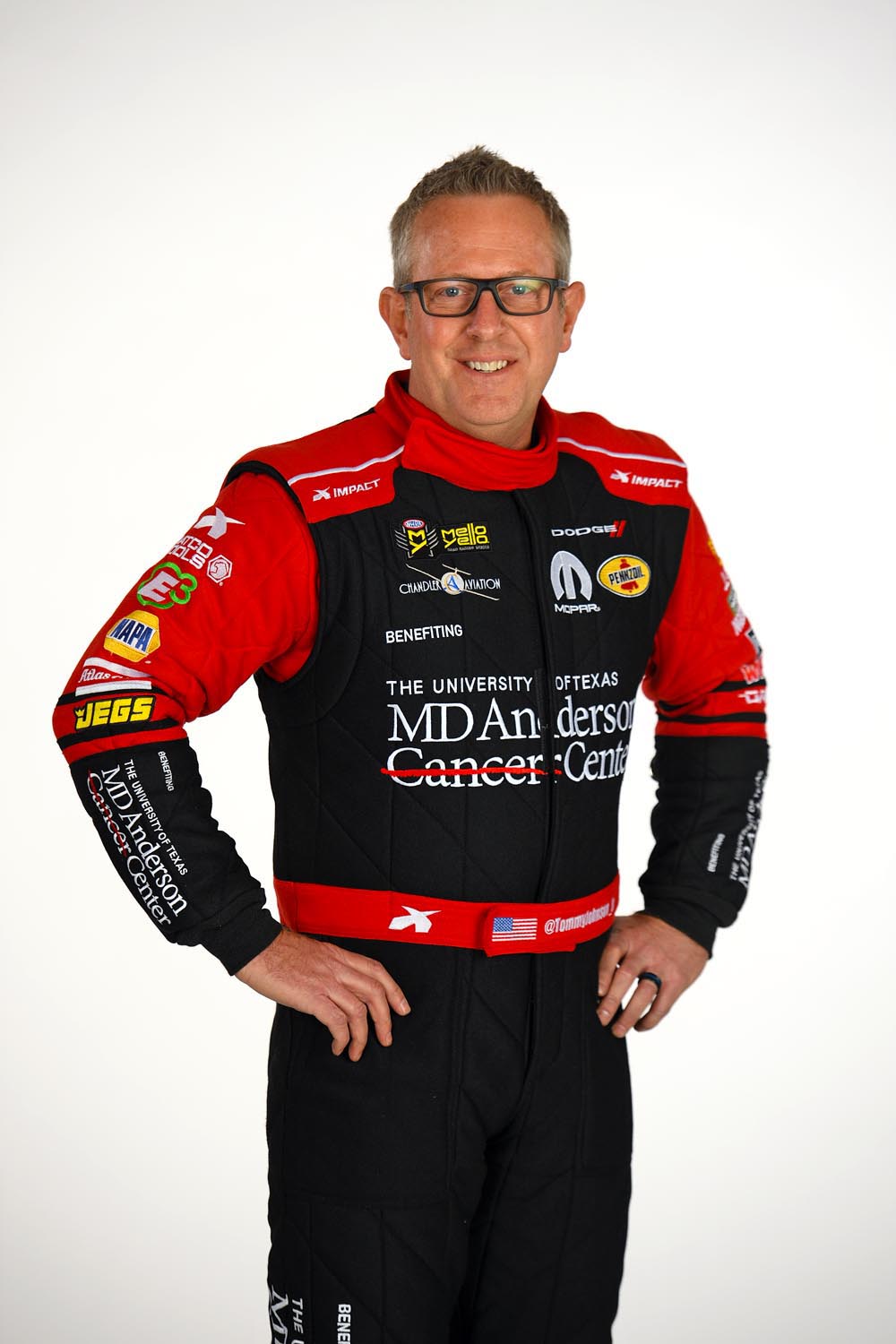 JOHNSON READY TO KICK OFF DECADE WITH NEW LOOK

Tommy Johnson Jr. embarks on the 2020s with a brand-new look. After six years behind the wheel of the Make-A-Wish Dodge Charger SRT Hellcat Funny Car, Johnson’s sponsor, philanthropist Doug Chandler, opted to switch things up in the new decade. Throughout the 2020 NHRA Mello Yello Drag Racing Series season, Johnson will represent The University of Texas MD Anderson Cancer Center, one of the world's most respected centers focused on cancer patient care, research, education and prevention, by campaigning the MD Anderson Dodge Charger SRT Hellcat.

Johnson begins the year after a career-best ‘regular season’ in 2019 which saw his John Collins-guided team compete in the final round four times, emerging victorious twice, including finally conquering ‘the mountain’ at Bandimere Speedway after 35 years. In addition to his four final rounds, Johnson was a semifinalist six times in the first 16 events, and suffered only four first-round losses, proving that he and his team were strong and consistent, no matter the track or conditions. A frustrating Countdown showing prevented Johnson from claiming a first Funny Car world championship, but a new look and new cause to showcase in 2020 are the perfect fresh start to kick-off the decade.

When the late Terry Chandler opted to fund the fourth DSR Dodge Charger team for the 2014 season and devote marketing exposure to Make-A-Wish, Johnson, a native of Ottumwa, Iowa, and longtime resident of Avon, Ind., was hired to drive and longtime DSR assistant crew chief John Collins was promoted to run the team.

Chandler was presented with the NHRA Blaine Johnson Award in November 2015 during the annual NHRA Awards Ceremony. The award named for late NHRA racer Blaine Johnson is presented to a person who exemplifies perseverance, commitment and dedication to NHRA.

In addition to winning event titles in seven countries – United States, Canada, England, Finland, Sweden, Australia and United Arab Emirates – he is one of only 16 drivers to win NHRA events in Top Fuel and Funny Car and one of only 18 to qualify No. 1 in both nitro categories.

Johnson’s first stint with DSR was in 2009 as the lead driver for the Yas Marina Circuit Top Fuel dragster team that was managed by DSR and later remained as DSR track specialist through 2012.

His racing career started at age 8 competing on motorcycles at his local Iowa track and raced on two wheels until 14 when he then strapped into his first racecar. At 15, he became the youngest to earn an NHRA competition license. His driving career began in the Sportsman ranks as he piloted vehicles in the Super Gas, Super Comp and Top Alcohol Funny Car categories. He broke through for his first NHRA victory at the 1988 NHRA event near Columbus, Ohio, beating Pat Austin in the final round of Top Alcohol Funny Car to collect his first career "Wally" trophy.

He earned his NHRA Top Fuel license in 1989. The next season, he powered his dragster to a run of 4.964 seconds becoming the 14th member of the exclusive Cragar 4-Second Club.

A year later, Johnson advanced to his first professional final round where he posted a runner-up finish to five-time NHRA Top Fuel champion Joe Amato at the Mopar Mile-High Nationals near Denver.

The following season, he became the 15th member of the Slick 50 300-mph Club after clocking a speed of 302.01 mph at Houston Raceway Park.

Johnson’s career was stuck in neutral for a few years before Gibbs, the NFL hall-of-fame and Super Bowl winning coach, hired him to drive a Funny Car in 1999 when he claimed two victories in four final round appearances and finished 10th in the Funny Car standings in just 13 events.

Johnson was hired by Prudhomme to drive a second Skoal Racing Funny Car in 2001 where he remained through the 2007 season. He finished sixth in the 2005 standings with crew chief Mike Green. He joined Bernstein’s Monster Funny Car team in 2008.

The Latest From Tommy